Photos of survivors of the British Battalion taken at Darmós on or around April 10th, 1938

If you look at this film of the return of the British Battalion to England on December 7th 1938, sandwiched in are some shots of the survivors of the British battalion taken around April 10th 1938 at Darmos. Also of interest is a shot of Harry Pollitt adressing the Battalion which I thought was taken in August 1938, but I now believe was taken in 14th April 1938 when Pollitt came over to meet the survivors.

“One morning about the 10th April 1938, before we went to our “foxholes”, we were paraded for photographs. At that time, about ten days after the massacre of the battalion at Calaceite on March 31st, there were no more than sixty to eighty men with the HQ of the Battalion, the rest were dead, prisoners, wounded or scattered over Catalonia.”

Edwin Greening. From Aberdare to Albacete. 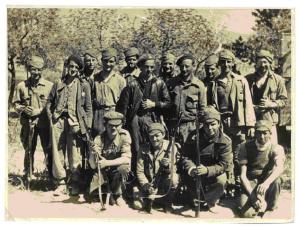 A recent flare up of photos on the IBMT Facebook page has prompted me to try and collate in one place all the known photos of survivors of the British Battalion in one place to allow other interested people to study and hopefully identify more men. This will be a work in progress, but hopefully in time, more names will be added. .A bit more permanent than Facebook! However, to keep people aware of new developments, I will notify the IBMT Facebook page when names are added.

This is a work in progress. If you can help identify other Brigaders, please contact Alan Warren on pdlhistoria@gmail.com

So let us start with the photographs that are probably the best known in IB folklore:

The photo above is not often seen, and is connected with a clip of film taken of the group. The two photos below are from the same grouping:

At 2’31” in this clip of film from David Leach’s excellent “Voices from a Mountain” you can see the above parade.. 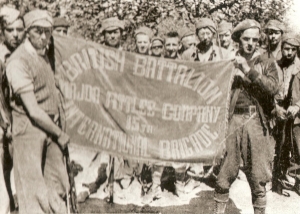 In this photo of the Clement Attlee banner for No. 1 Company (the original Battalion flag having been lost in the Great Retreats of March 1938) we have the following identified Brigaders: Far left, Domingo Morales Garcia. Holding left side of flag: Morris Davies. Holding right side of flag, Tom Glyn Evans. Behind the flag with glasses is Edwin Greening.

The XV Brigade pennant with the bear and coat of arms of Madrid on it. A pennant had been given to each Brigade at the Calderon Theatre in Madrid on October 31st 1937.

Holding the broad edge of the pennant is Frank West. Holding the tip is Edward Flanagan. In the dark jacket with glasses is probably George Green, though members of his family state that at this time he had a beard and the face does not look like his. His son, Martin Green originally identified Edwin Greening in the Clement Attlee photo above as his father. To the right at the rear in the black beret is Tom Howell Jones. To the right directly behind Frank West is Evan Jones.

These three photos are a sequence running from left to right of the same group:

Sol Frankel right of man wearing a pale shirt to the left and to the left of the tall man with the black shirt at the back.

(see Part 2 of “Voices from a Mountain” on this http://www.youtube.com/watch?v=bvm5AGvV1f4&feature=youtube_gdata_player

At 2’31” you can see the film of the Battalion on parade as the first photo above. And at 3’05” Sol Frankel in the above photo). 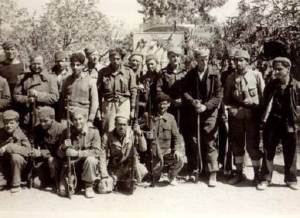 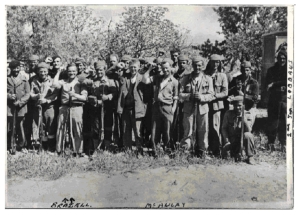 Note the names written on the edges of this photo. Brazell Thomas (in pale shirt to the front?), Bob Cooney bareheaded in the centre,. William MacCauley from Glasgow left of Cooney. John Lobban is second in from the right? 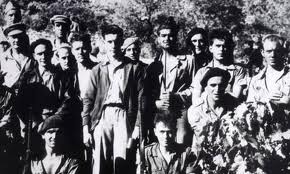 Sadly, this one has been located as having been taken at Marca later in June. It is believed that Australian Kevin Rebecchi is crouching behind the grape vine to the right wearing the beret. In the black leather jacket and beret on the left, Jack Jones; the head behind the man to the right to Jack Jones is Frank Deegan; Beside man next to Jack Jones and who is holding a rifle, Cecil “Ces” Bibby, next to Bibby, Jimmy Jump. A George Bean is also in this photo, but unidentified as yet.

Third left holding rifle and in beret is Peter Cassidy. At the back to the right bareheaded and with black hair is Alun Menai Williams. To his right with glasses and beret is John Ness. 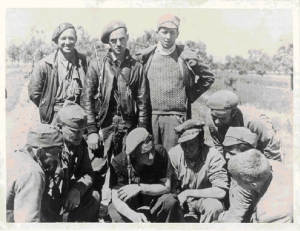 This photo has standing from left to right: Fred Morris, Tom Glyn Evans and Morris Davies.

Finally two photos of the Battalion at a meeting in the same location as the photos above: 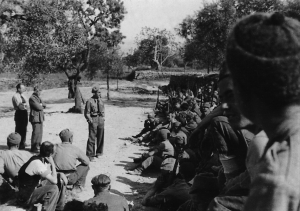 Sam Wild addressing the battalion. Bill Rust and Bob Cooney behind him.

p style=”text-align:center;”>The Battalion responding to a Daily Mail report that they had been wiped out!