In a nutshell, I arrange tours at almost anytime if people contact me. Each tour can be as short as half a day in Barcelona or Madrid, to long weekends on the Ebro or further afield.Each bespoke tour is made up for especially for the client  according to their interest and knowledge. they rarely are the same, and often involve nee and exciting discoveries on the way!

I also announce various events on the main page that I am attending, and people are welcome to join me on such activities-

For tours straight out of the hat, please run down the list to find out more about what interests you. Remember that many tours can be organised at a time and budget to suit what is being sought for. Drop us a line explaining what you are after.

TOURS THAT CAN BE CONDUCTED AT ALMOST ANYTIME (Providing we have the time free of other tours, though!) 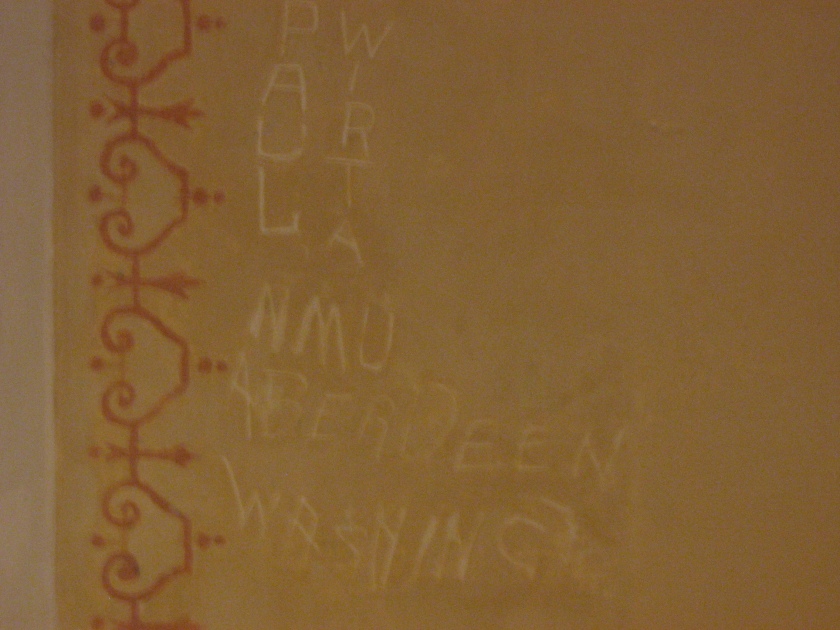 HALF DAY TOUR OF ORWELL’S BARCELONA AND THE MAY DAY REVOLUTION. Available with sufficient notice. (Contact Alan on pdlhistoria@gmail.com for further details)

HALF DAY TOUR OF “BARCELONA EFFECT”- THE BOMBING OF BARCELONA AND THE SURVIVING EVIDENCE. A half day tour of the places that were heavily bombed by the Italian Airforce during the War. This can include a visit to Refugi 307 near Montjuic (only open at weekends). Available with sufficient notice. (Contact Alan on pdlhistoria@gmail.com for further details).

WEEKEND TRIPS TO THE EBRO (Throughout the whole year usually Friday to Monday, but a “light” version can be done Saturday morning to Sunday evening too. Contact Alan on pdlhistoria@gmail.com with your possible dates to see what can be arranged).

A WEEKEND AWAY IN AN UNKNOWN IDYLL! TUDELA ESCOLA MILITAR AND THE BALAGUER OFFENSIVE, MAY 1938. (Contact Alan on pdlhistoria@gmail.com for further details).

The area of the Segre river north of Lleida is a little known but quite beautiful area only 90 minutes by car from Barcelona. There are a large number of areas connected with the Spanish Civil War aswell as good food, good accommodation and places never seen by the normal visitor to Catalunya. Places such a El Merengue, where the 27th Republican Division of boy soldiers or “Biberons” were slaughtered in a futile series of attacks are vivid reminders of the horrors of this war. In addition other unusual places are possible to visit including, by special arrangement ,the Escola Militar with an incredible variety of propaganda still visible on the walls. Kindly, the owners of the Escola Militar at Tudela have allowed visitors to gain access to the building in order to allow visitors to discover the wide variety of unique propaganda preserved on the walls of the building. Our intention is to offer a weekend visit to the Escola Militar and to allow visitors examine and understand the little known but important Balaguer Offensive of May 22nd 1938. The weekend can also be combined with the normal weekend tour to the Ebro by staying one night in the beautiful village of Montsonis if desired . A trip to see the remains of a T26 Soviet tank at Vilanova de la Barca is also offered (actually lost in the River Segre between August 9th and 7th 1938 in a later Republican Offensive in the area).

The Quinta de Biberons were aged between 16 and 17 and were conscripted into the Republican Army after the Great Retreats of Masrch 1938 to rebuild the Divisions for the Segre and Ebro Offensives in the summer of 1938. Lots of people know about the Battle of the Ebro and the Quinta de Biberon memorial on Hill 705 but are also unaware of the equally important Segre Offensive which began on 22nd May 1938 and continuing through to November 1938 before the Front collapsed and Catalunya was occupied in January 1939 by the Nationalists.

The area around Montsonis and Tudela de Segre is a quite unknown area for foreign visitors to explore. For those who wish to discover this beautiful landscape and not just to do with the Spanish Civil War, English speakers Sara Hamill and Sandy Graupera can help organise pleasant accommodation and trips to places of interest in and around the village of Montsonis to allow visitors to return and maybe stay longer and explore the natural history and landscape of the Segre area.

To whet your appetite I attach the description by John Wainwright as to his thoughts on the Tudela Escola Militar and the Segre battlefield which he visited with us last October:

No matter how many books and articles that you read on the International Brigade and their role in the Spanish Civil War, nothing can offer more of an understanding as visiting the country itself. I have just returned from Catalonia where I have been carrying out research for my biography on Ivor Hickman, Chief of Observers in the British Battalion (to be published 2010). In the company of Alan Warren of Warren and Pell books, I was expertly guided around some of the most emotive locations that I have ever been to. Alan offers bespoke tours of the battlefields and surrounding areas for a very reasonable price and one could not possibly wish for a more knowledgeable and personable character to be your guide. In fact as a non-Catalan speaker, my entire trip would have been in vain without Alan there to translate and interpret. One of the many unique and otherwise inaccessible locations that Alan took me to was the Escola Militar at Tudela on the River Segre, a Republican officer’s school during the conflict. I had the privilege of being one of the first English visitors to this privately owned site that is rarely open to the public. The walls of the school are still festooned with propaganda murals and slogans painted by some long forgotten idealistic Republican more than seventy years ago. The classroom still has tactical maps beautifully painted on the walls. However, the property is currently up for sale…and Alan and others are hoping that the Catalan Government and local groups will provide funding to save the building and allow it to be much more accessible as part of their resurrection of the past that is key to their current policies. In the same village as the school I was also shown a underground tunnel in a private house that served as a bomb shelter for the village. Not for the claustrophobic but a vital element towards understanding the conflict from a civilian perspective. 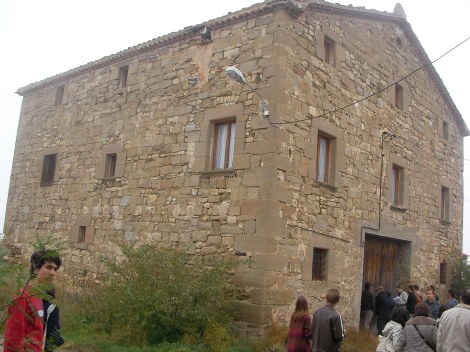 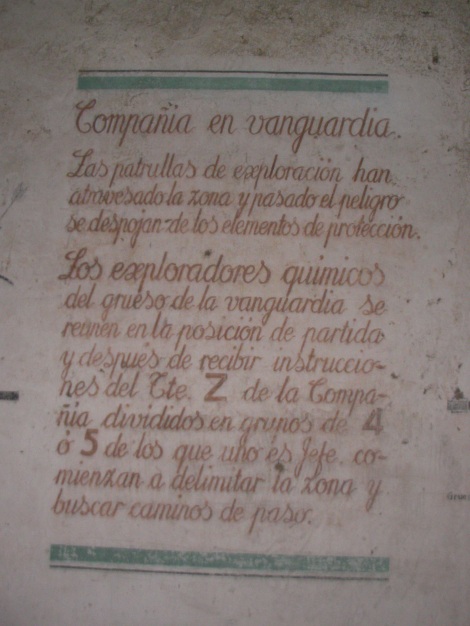 An example of one the chemical warfare lessons painted in the classroom.

Another site of interest is ‘El Merengue’, a hill fortification that has been restored to illustrate the defences of this impregnable site. In May 1938, a force of Republican troops (The Biberons or Baby Bottle Soldiers as they were known due to their age. They were not meant to do their military service until 1941) were ordered to take the hill. Their officer ordered them to attack with the words “Come on boys let’s take this hill like we were eating a meringue”. They were slaughtered by the Nationalist defenders. One can feel their ghosts even under the heat of the Catalan sun. A profoundly moving site……. 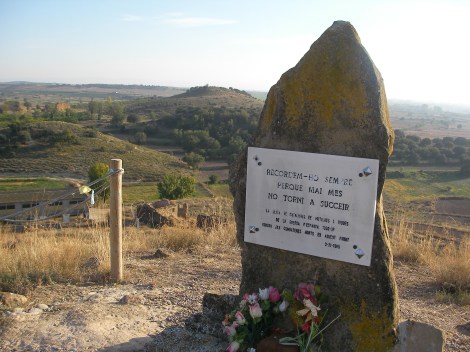 Memorial erected by the Quinta de Biberons on “El Merengue”.

Some of the reconstructed trenches on “El Merengue”

It is impossible for me to list the amount of things that I saw and experienced in my four days in Catalonia in few words. Alan worked in conjunction with Sara Hamill and Sandy Graupera on part of the visit and hopes to be able to offer clients the benefit of their expert local knowledge to add yet another dimension to his already near definitive tours. Accommodation was excellent, especially the apartments at Montsonis arranged by Sara and Sandy. The Catalan cuisine is simple yet excellent providing imaginative tastes combined with good value for money. 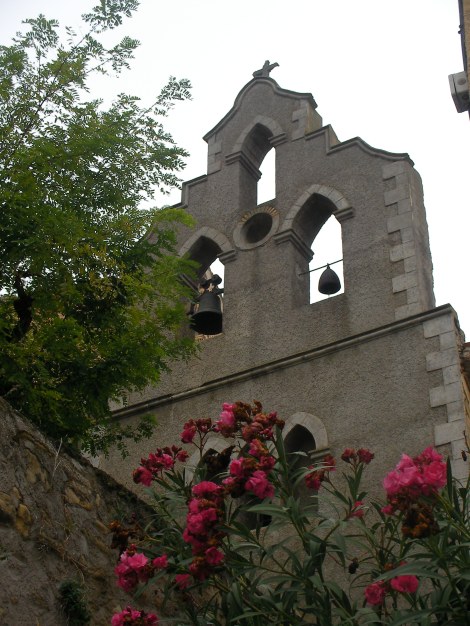 The church at Tudela de Segre (note the bomb casing now used as a bell!)

For further details and to reserve a place please contact Alan on pdlhistoria@gmail.com