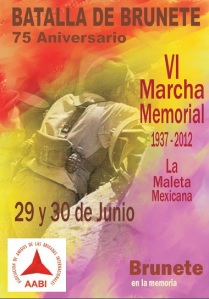 This year the Brunete commemoration does not clash with the International Brigade Memorial Trust’s annual event at the London Eye. So we hope to welcome many British to Brunete this year.  Gerda Taro, Robert Capa’s lover and fellow photographer, will be remembered this year with the showing of Trisha Ziff’s excellent film “The Mexican Suitcase” at the Ateneu on Friday June 29th. Coaches are available to take individuals out. The March will start from Brunete to the river below Mosquito Crest. Picnic lunches are the order of the day to bring and share. The river by the Ford where the XV Brigade had its Estado Mayor is a beautful place.  As described by Charles Orr in “The Book of the XV International Brigade, “It would be a lovely spot for a picnic” (page 153). So we will be having a picnic there seventy five years later to talk, sing and enjoy the company of others keen to remember the Battle and its legacy. 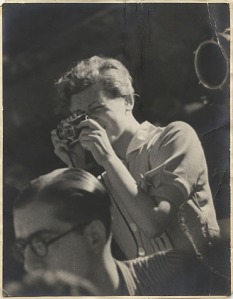 We will also be remembering XV Brigade Chief of Staff George Nathan who was killed in the last days of the Battle of Brunete. Sadly, his biography by Melody Buckley (“A Temporary Gentleman. The Life and Times of George Nathan”) is not complete yet, but we hope to have a short resume of George’s life written by Melody to read on the March or later at his new discovered burial place at Torredolones.

We hope that British people will be able to join us this year for the 75th anniversary of this important Battle. 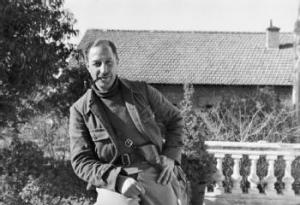 This year the usual march was organised by the Research Group Brunete el la Memoria (www.brunetelenlamemoria.com) with the expertise of Ernesto Vinas and Angel Rodriguez. The founder of these Marches, Seve Montero, who along with Brigader Bob Doyle, this year allowed Ernesto and Angel to take some of the responsibilities and hard work that these events take off his shoulders and the result of the joint efforts of both Brunete en la Memoria and AABI made this year’s march a great success. Over 100 people both young and old, made the march in the boiling heat.

Having made the start point of the march a large group of Italians from Madrid who are members of ANPI had joined the March. These people are part of a large group remembering the anti fascist fighters in Italy during and after World War Two with over 130,000 members in Italy and they had a film crew who produced the following short film of the March. http://www.youtube.com/watch?v=u0ETQTUbnbE 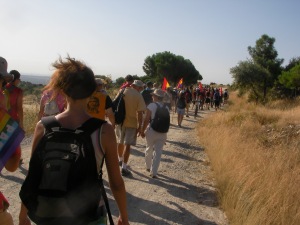 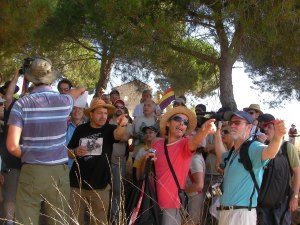 A disagreement of the locations of the Battle?  Ernesto Vinas, facing away from the camera, describing the Battle,  pointing one way while others point in the opposite direction!.

A view of the battlefield with an airstrip and an airship parked there! I am fascinated by old airships like the Graf Zeppelin and the R100 and R101 etc. and I just wanted to put this photo in! 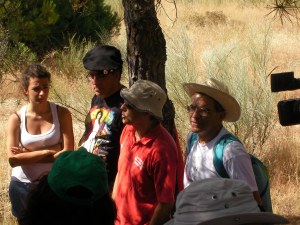 Marco of ANPI and Seve Montero of AABI paying homage to the Italian Brigaders and announcing next year’s March at Guadalajara.

At the end of the March after Marco and Seve had made their speeches I publicly asked Seve if AABI had any plans to commemorate the battle of Guadalajara in March 2012 on the 75th anniversary of the battle. He replied that AABI would be working together with the Italian International Brigade Group to make a visit to the battlefield and to remember the Italian Brigaders who fought there. Sadly, however, Seve also mentioned that, because of the work on the forthcoming October event to commemorate the arrival of the International Brigades to save Madrid in November 1936 and the work involved in organising the Guadalajara event next march that AABI would not be active in setting up the Annual March for Jarama next year. However, whilst we were having our picnic by the Command post, Rory O’Brian and I chewed the fat with Seve and from these discussions Rory has kindly offered to organise an event for February next year to commemorate the Battle of Jarama and the involvement of the British and American battalions. Rory is now in touch with Jim Jump, secretary of the IBMT ( http://www.international-brigades.org.uk) and an appropriate event will be organised for visitors keen to visit the battlefield around the time of this important battle. I mentioned earlier in the blog that in February this year, the mass graves of British and American dead from the battle have been recently located and we hope to visit the sites during the March aswell as to visit the position of the British Machine Gun Company to view Suicide Hill and perhaps to have both Americans and British there (aswell as heaps of Spanish!) over the same weekend to do two separate walks to their own respective “Suicide Hills”. More information, confirmed dates etc will be passed down through Jim Jump and the IBMT as Rory starts to work with Seve and AABI to make this event a significant commemoration on the 75th anniversary for those who wish to come. It will be good.

A better photo of Ernesto Vinas holding a Soviet 75mm anti aircraft shell that he suddenly discovered above Casa Palatas, the Command Post  of the 10th Republican Division and advanced position of the XVIII Army Corps! 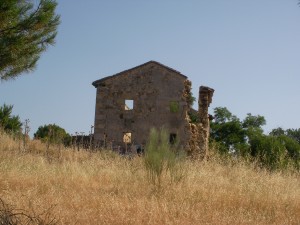 Casa Palatas, the Command Post  of the 10th Republican Division and advanced position of the XVIII Army Corps.

And speaking of Jarama, a new book on the battle has just been published by Osprey Publishing. “They shall not Pass!” by Ben Hughes is not the usual Osprey format, but a completely new format as a hardback with 272 pages and two blocks of photos bound in to the book. I have yet to finish the book, but I hope that with Osprey’s marketing skills and distribution network that the book will sell well and raise interest and awareness in the International Brigades and the British battalion. I will review it here once I have read it completely soon.. But if you cannot wait, here is the link to buy a copy: http://www.ospreypublishing.com/store/They-Shall-Not-Pass_9781849085496 But if you look up the National Archives bookshop in London you may be in for a pleasant surprise! http://www.nationalarchives.gov.uk/bookshop/searchresult.aspx?k=they%20shall%20not%20pass Next year will, of course, be the 75th anniversary of the battle of Brunete. Both AABI Brunete en la Memoria will be working together to make this a significant event. It is just a pity that the IBMT Annual event at the London Eye now clashes on the same weekend with the Brunete march, but such is life.