Opening of the Anti Aircraft battery at Turó de la Rovira in Barcelona.

It is with great pleasure that I can announce that the refurbished anti aircraft batteries above Barcelona have now been made into a place to study and better understand the air defences of Barcelona during the Spanish Civil War. The beautiful views from this hill over Barcelona are also worthwhile looking at and with public transport (no 28 bus) from Placa Catalunya in the centre of the city can get you easily up to the Hill. Sadly March 27th was a bit of a dull, wet and foggy day with nil visibility over the city below, but we returned later in the week to take some nicer photos which you can look at later in this article. Hitherto the battery had been a derelict and forgotten site with lots of graffiti, but after having spent 1 million euros the area is now quite clean and tidy (but for how long?????). During the day young and old now sit and talk whilst contemplating the beautiful views across the city. Numerous panels in Catalan, Spanish and in English explain not only the history of the anti aircraft battery, but also the post war shanty town of 110 buildings with 600 inhabitants (called “Els Canons” after the guns!) that were built here illegally to house immigrant workers. The area was not finally cleared until the early 1990s and tiled floors mingle with the old concrete emplacements in a strange but fascinating palimpsest of Barcelona’s Civil War and post war history combined. In May 1937 work was begun on the building of this structure and  four Vickers 105mm guns were placed in the purpose built emplacements to defend Barcelona from aerial attack from the Balearics by Mussolini’s aircraft. With a range of between 7,000 and 13,000 metres the guns were a very important part of the Air Defences.  By October 1937 the construction was complete. Between March 16th to 18th 1938 (the same time as the Great Retreats in the Aragon), Barcelona was subjected to a continuous bombardment. The photo below was taken on March 17th 1938 at 14.05 when a bomb landed on an ammunition truck close to the University. Initial reports thought that it was a new type of bomb because of the massive explosion and destruction. 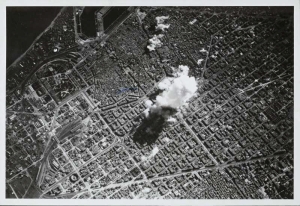 Refugi 307 near Montjuic is a good place to start a tour of the bombing of Barcelona (Only open on weekends with guided tours at 1100,1200,1300 and 1400. Contact Museu d’Historia de Barcelona to reserve a place. www.museuhistoria.bcn.cat) . Then to Plaza Sant Felip Neri to see the damage to the walls done on Sunday January 30th 1938 between 0855 and 1125 when at about 1000 a 250kg bomb, one of  36 bombs from six Savoia S79s fell in the Square and  killed 42 people, the majority of them infants, in the guardaria of the church (Some  local tourist guides say that this square was used for executions). Then to Carrer Cortes Catalanes to see the monument outside the Cinema Colliseum to the bombings and finally up to Turó de la Rovira over a weekend day. At present there is no bar at the Turó, so take a picnic with you!

This is a short Catalan language news report with impressive clips from the film concerning the bombing of Barcelona on March 17th 1938. There is even a glimpse of the 105mm anti aircraft guns!  The film is based on the fictional character of a Catalan woman whose grandfather was one of the crew of the Anti aircraft battery at Turó de la Rovira, and her chance meeting with an Italian academic visting Barcelona who was in the Italian Airforce during the war. Sadly, it is not yet available on dvd, but this clip hopefully gives you a good idea of just one of the many bombing raids on BCN that took place on March 17th 1938 (Though according to most sources there were five Savoia S 79s in the raid rather than four in the film). The bombs falling are quite beautiful and hypnotic, yet terrible to behold. Between 13th February 1937 and 25th January 1939 Barcelona suffered 385 bombing raids with 2,750 dead, over 7,000 wounded and over 1,800 buildings damaged. In a speech in June 1940, Churchill acknowledged the bravery of the people of Barcelona during this time. It was a taste of things to come in World War Two. The results of the bombings were analysed by experts in London to prepare for the future bombing of London under the innocuous title, “The Barcelona Effect”. Luckily they over estimated the casualties, but at least they were prepared to a certain extent for the Bombing of the United Kingdom in 1940.

Below is a link to the first of three sections of the 1938 Propaganda film “Catalunya Martir” concerning the bombing of Barcelona.  Made by Laya films, this version is in the original French with Catalan subtitles. Once you finish the first section it should guide you to the second and third parts. 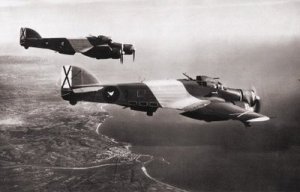 The Opening on a rather foggy Sunday 27th March. 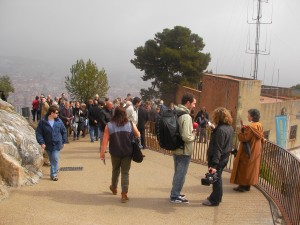 Some of the large group that attended the Opening.

A view from the Battery on a nicer day later in the week.

A view towards Montjuic (on the right)  with Sagrada Familia in the centre..

Young and old enjoying the peace and the views from this impressive spot. 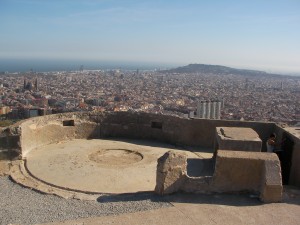 One of the four 105mm gun emplacements looking over Barcelona.

Behind the Battery one can see the “secret” of the International Brigade memorial in Carmel.